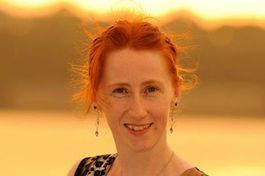 Why am I a Renaissance Woman? Because I do a LOT of things.

I’m a licensed attorney in NY and CT (also licensed in the Eastern and Southern District Court in NYC), former Production Executive/In-House Counsel of an indie film production company, a freelance writer who’s written for pay, an actress and a singer who had a professional singing debut at the Broadway Comedy Club. I was the Subcommittee Chair of Entertainment and Media at the NY County Lawyers Association (NYCLA for short) in 2013 & started modeling in the same year so now I’ve done at least 2 of the pretty girl tropes (model & sorority girl).  I’ve also survived things you probably couldn’t without resorting to drugs, alcohol, going to your parents, having a nervous breakdown or committing one or more felonies.

Yes, I’m a natural redhead and don’t really have the looks or temperament for your average law firm. I’ve managed to accept myself for who I am and figure it’s best not to try being what you are not. So let’s say I’m a creative first and lawyer is at least a distant second. This career didn’t come for free and I earned my way into it. No friends in the business, family connections or money that wasn’t created by my own efforts.

You won’t see me riding anyone’s coattails, sleeping with people, begging anyone to work with me or pushing my way into projects. I survived a very nasty divorce, am extremely blunt and known as “the enforcer” or “the pit bull” among my contemporaries. Don’t expect to have a shot with me unless you’re mentally an adult, have your own shit together, respect me for who I am (not what you wish I was or think you can turn me into) & aren’t an abusive douchebag.  Oh, and you’d better have good looks, not view me as a meal ticket & realize that getting to be with me is a privilege.  I get a LOT of offers & have high standards in all realms of life so if you can’t meet these requirements, then don’t even waste your time or mine with the flirtations.

I also have a strict policy against mixing my personal life with my business life so spare me if you work in the entertainment business.  I don’t play that and if you ask, I’ll presume you think I’m not good enough on my own merits & have to resort to the casting couch to get anywhere.

Finally, no unsolicited materials please. The cream will rise to the top and NO ONE likes being used for their connections or their job. I help those I feel deserve it and who can show me they have the passion and drive to succeed. Part of success in this industry comes down to your own efforts.

My rant blog and if you don't like it, be a grown up and debate me or get your own blog & let's see how funny YOU are.

My attorney Avvo profile. You'll notice that I don't put certain personal links there since it's for legal clients & attorneys to find me.